Our couple grew up in two different Northeast states, but even after a move to Colorado, they wanted to tie the knot where they felt most at home, in the mountains of Maine. Here is their love story:

Our bride, Anna, hails from Chatham, New Jersey although she now calls Bernardsville, NJ home. She has been a teacher for 6 years, and is 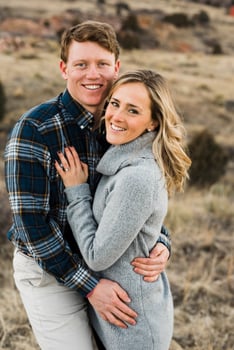 currently the Assistant Dean of Students at a boarding school in Colorado Springs, Colorado. Our groom, Jeff, grew up in Amesbury Mass, and has held a variety of teaching positions. He currently instructs English at the same Colorado boarding school as his future bride. They spend their summers in Bridgton, Maine, where Jeff is a Unit Director at Camp Winona. Anna & Jeff love skiing in Colorado, especially Keystone and A-Basin, and enjoy hiking on the 1,100 acres of the school campus where they reside. When not enjoying the outdoors, they have their hands full with their 2 dogs, a Labradoodle named Bodie, and a Chinook called Penny, named after the Penobscot River in Maine.

How did you first meet?

Our couple met in New England working at The Taft School in Watertown, CT.

Jeff hosted many student hikes on the weekends, where he claims Anna snuck into to spend some extra time together, a claim that Anna doesn't deny! After a few casual hang outs, Jeff stated that he "didn't want a girlfriend" while at Dunkin Donuts. Many of their first "dates" were during the day on breaks during school. It was while splitting a blueberry muffin at a used bookstore, that they realized they officially became a couple.

In February of 2018, Anna & Jeff made the decision to move to Colorado for a new experience and adventure. Before moving that summer, they stayed at a family home of Jeff's on Martha's Vineyard. After his family left, our couple had 3 days alone on the island. With a hole burning in his pocket, Jeff proposed to Anna on the beach under The Gay Head Cliffs. Caught off guard, Anna happily accepted! The next day they continued their celebration with lobster rolls from Larsen's under the sunset.

How did you choose Granite Ridge?

Anna & Jeff knew they wanted to be married in Maine. There was the personal connection to

nearby Bridgton, and they loved the beauty of the state. The first thing that captivated our couple was the views at Granite Ridge, both from the Estate and the Barn. Anna loved the idea of being able to get ready for the ceremony right at the Estate, only fifty yards away. Both loved the family feel of the Granite Ridge team, as well as being able to have an extended weekend with their own close family and friends. The plan for the wedding is lots of greenery with simple flowers to accentuate, but not overwhelm the natural beauty of the property. Of note will be Eucalyptus with white and pink roses down the center of each table. 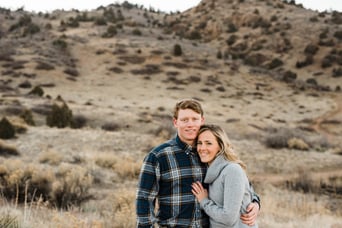 Jeff immediately responded by highlighting Blue Elephant. They had a blast with Reuben at the tasting as well as having their socks knocked off with the food. It was difficult to pick among all the amazing choices, but at the wedding they will be enjoying the flour crusted chicken, steak with fingerling potatoes, as well as passed apps including lobster rolls & bacon wrapped scallops. Anna mentioned their photographer, Heather Huie of Apollo Fields. A friend of a friend, Heather already has shot their engagement photos, which came out incredible. They are also very excited about the fun and energy that their band, East Coast Soul, will be sure to bring! We are sure looking forward to join in the lobster rolls and funk music! 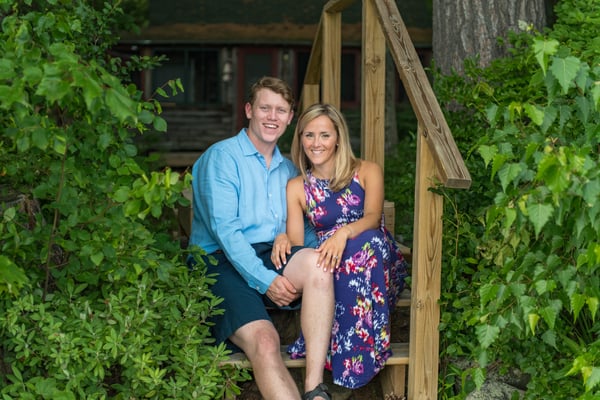